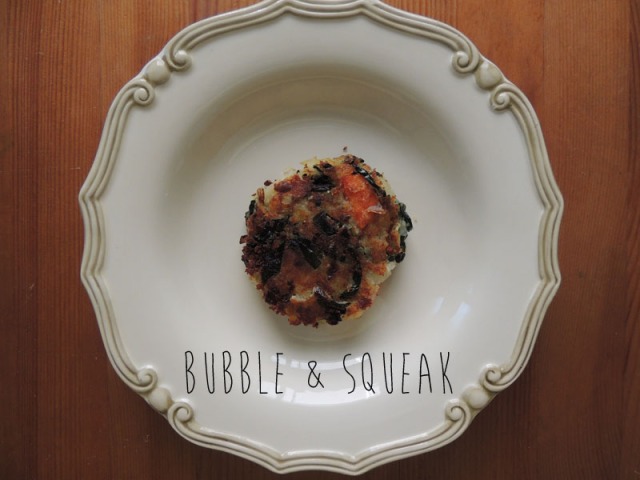 Bubble & Squeak is an English pub food – traditionally made to use up leftovers.  Roasted vegetables and boiled potatoes from the previous night’s roast dinner make up the base of the dish, and can be made with bits of ham or bacon or literally whatever other ingredients you have laying around.  During World War II, it was a popular way to ensure food was not wasted.

When I’d first heard the term “Bubble & Squeak”, I drew a blank, as I had absolutely no idea what it was.  To the unfamiliar, English food often has funny names that don’t give any clue as to what you’re about to eat (Toad-in-the-Hole, Bangers & Mash, Spotted Dick, to name a few).  Then I watched a lovely video by Sophie Dahl (below) and was inspired to make some, using up some of our farmer’s market veggies and some potatoes that needed to be utilized.  My version is pretty simple, but feel free to add your own twist (Sophie’s version uses parsnips and celeriac in the mash base)!

Bubble and Squeak
1 lb. potatoes, boiled
1-2 carrots, boiled or roasted
1 small leek, chopped (white part and light green parts only)
4-5 leaves lacinato kale, julienned
half & half, milk, or crème fraîche
salt
pepper
3T butter
vegetable oil for shallow-frying
Mash the potatoes as if you were making mashed potatoes as a side dish – add a tablespoon or two of butter, and thin with a little half & half.  Season with salt & pepper.  Add the cooked carrots and mash them in lightly to add some color.  Set aside.
In a saute pan, melt a tablespoon of butter and add the leeks, cooking to soften, but do not brown.  Add cooked leeks to the potato mixture.  Next, the last tablespoon of butter to the pan and gently cook the kale  until soft (but do not overcook).  You want the kale to retain its color as much as possible.  Add the cooked kale to the potato mixture, and mix everything together until well blended.
At this point, you could also add:
cooked peas
chopped bacon or ham
cooked shredded Savoy cabbage
Using your hands, form the mixture into patties.  Heat a generous amount of vegetable oil in a frying pan over medium-high heat, and fry each patty on both sides, ensuring a lovely brown crust forms on the outside.
If you like, serve with a poached or fried egg on top and a dollop of crème fraîche, or a bit of brown gravy.